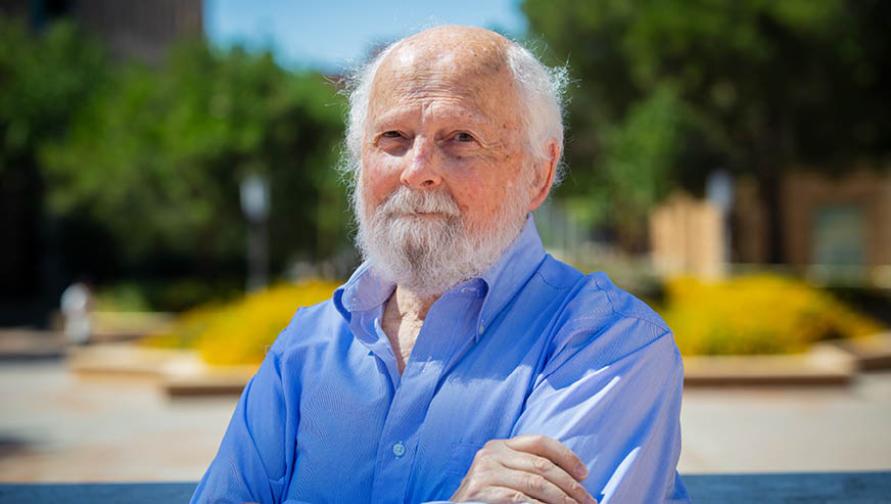 Carl Lenhart ’70  may be known among Boston Celtics fans as “chest pump guy,” for his trademark celebratory move; among his students and peers, however, he is known for his passionate zeal for Greek and Latin. This passion fueled his 32-year-career teaching Greek and Latin to high school students primarily in Cape Cod, Massachusetts.

Lenhart, who earned his B.A. in classics from the University of California, Irvine, credits three of his former professors—Theodore Brunner, Luci Berkowitz and Peter Colaclides—for sparking his love of the classics and his enthusiasm for sharing that knowledge with others.

“They believed in me, and especially made me aware that to ‘gnōthi sauton’ [‘know thyself’ in Greek] is a process of lifelong learning,” he says.

Lenhart initially earned a B.A. in English from California State Fullerton where he began studying classical mythology with professor Miriam Cox. Entranced by these myths, he wanted to explore them in their original languages of Greek and Latin. Taking Latin at CSU Fullerton and Greek at nearby Biola University, he studied concurrently at both universities until graduation.

During the spring semester of Lenhart’s senior year, his Latin professor suggested contacting Professor Theodore Brunner, founding chair of UCI’s Department of Classics, who invited him over for a personal interview.

“I met with him and his colleague, Professor Berkowitz. I hadn’t known that such a discipline as the classics existed. It amazed me that there was an established program for the combined study of the Greek and Latin languages and literatures, the very object of my current studies at two colleges,” he says.

The discussion went well and Brunner immediately invited Lenhart to join the program. Berkowitz quickly set up a two-year study program for Lenhart and helped him register for classes.

“Dr. Brunner was the father figure of the program and Dr. Berkowitz managed the business side of things. They were both excellent teachers and mentors,” Lenhart says.

His third mentor at UCI was Peter Colaclides, then a professor of classics. A beloved and charismatic teacher, Colaclides won the UCI Distinguished Teaching Award in 1971. As Lenhart’s primary Greek instructor, Colaclides greatly influenced him to think of Greek and Latin in a bilingual way and showed Lenhart how Latin language and literature frequently drew from the Greek.

“This was a special educational time and an opportunity for me to learn from someone who was manifesting the very heart of what it means to be a human being. He inspired me to think of the two languages, in several aspects, as virtually one language and this experience was pivotal to the way I taught Greek and Latin for over 30 years,” he says.

Lenhart became a teacher at Barnstable High School primarily because the school allowed him to pursue this bilingual method of teaching. In the summers of 1990-91, Lenhart received a National Endowment for the Humanities fellowship to study various ways of incorporating Greek within a Latin curriculum. In 2002, the Classical Association of New England awarded him the Edward Phinney Fellowship, which paid his salary for two years while he established a full classical Greek program at the high school. This proved to be another defining step in his career.

The success of the Greek program at Barnstable caught the attention of Ilias Tomazos, an instructor of modern Greek studies at the University of Connecticut and founding president of the Hellenic Society Paideia. Tomazos, a native Greek, is the director of Paideia’s study abroad program in Greece. He invited Lenhart to create a high school study abroad program.

Lenhart accepted the invitation with his usual enthusiasm. He named his program “Learning on the Run” because whenever they had a break—whether at a beach, a mountaintop, a monastery, or an archeological site­—Lenhart secured a comfortable spot and conducted his Greek classes in the open outdoors.

“My greatest academic and social honor occurred as a result of this summer program. The success of ‘Learning on the Run' and the impact it was having on transforming the lives of numerous students motivated the Mayor of Delphi to award me honorary Greek citizenship!” says Lenhart.

The ceremony took place at Lenhart’s favorite place—the sacred Temple of Apollo and the revered Omphalos—the beehive stone that the ancient Greeks believed marked the center of the world. It was televised nationally in Greece.

“It was the perfect place for me to obtain such an honorable, even sacred gift,” he says.

Lenhart directed “Learning on the Run” from 2003 until he retired in 2015. After Lenhart’s retirement, Tomazos decided that Paideia should honor the three UCI professors who had trained him so effectively. He asked Lenhart to write essays about each professor’s transformative impact on his life. The Brunner, Berkowitz and Colaclides scholarships—each $2,000—are awarded through the UCI chapter of the Hellenic Society Paideia for the benefit of UCI students studying at Greek universities. Tomazos had an extra surprise in store at the initial awards ceremony—establishing a fourth scholarship in Lenhart’s honor.

Despite officially retiring, the energetic Lenhart stays active. Besides attending his beloved Celtics games and spending time with Margot, his wife of 49years, Lenhart is developing a bilingual course in Greek and Latin for lifelong learners—adults who still have a thirst for knowledge. It will, of course, include a study-tour of Greece with some “learning on the run” lessons.

“This course will be for people who want to learn for the sake of learning and is the culmination of my work in the classics, which essentially began at UCI,” he says.

Lenhart recently made a generous gift to UCI’s Theodore Brunner and Luci Berkowitz Undergraduate Award in Classics, a merit-based award that supports students majoring in classics. His motivation is two-fold.

“First, it's my way of thanking them for what they did for me. Second, I hope that I’m able to somewhat tap into the spirit that they showed me—which is this love and excitement about learning! I'm counting on that still being alive here [at UCI]. I hope that these young people can have the insights about learning and life that I received and make this world a better place,” he says.

Lenhart sums up his UCI experience “kata thumon” [from the heart] in these words:

This is education,
This is philosophy,
This is the humanities:
Taking what we have learned
And applying it in a practical way
To life, transforming not only others,
But also, ourselves.
Photo credit: Steve Zylius/UCI