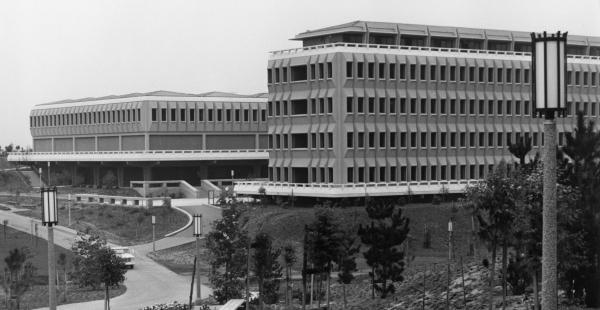 UC Irvine, the eighth campus in the University of California system, opened its doors in 1965. The Division of Humanities was one of five liberal arts divisions on campus that were poised to welcome students upon campus opening. Samuel McCulloch, UC Irvine’s founding dean of Humanities was appointed in 1963. As dean, he laid the foundation for humanities by recruiting and retaining world-class faculty.

Dean McCulloch created four departments that would serve as the foundational core of the Division: English and comparative literature, foreign languages and literature, history, and philosophy. He made quick work of recruiting the very best in their scholarly fields to join the Division and by the campus’ opening day, the Division of Humanities had thirty-one faculty members.

A few short years after UC Irvine’s opening, the School of Humanities added classics as its fifth department under the direction of Professor Theodore F. Brunner. Brunner developed and started the Thesaurus Linguae Graecae (TLG) Project, a thesaurus of the ancient Greek Language. To this day, the TLG has identified and digitized the entire extant corpus of Greek from Homer to the fall of Constantinople in 1453 CE, a collection consisting of more than 4,000 authors and 15,000 works.

It was also around this time period that the School of Humanities’ prestigious M.F.A. Programs in Writing enrolled its first graduate students.

By 1967, the Regents of the University of California turned the five original liberal arts divisions into individual schools within the university, and thus the Division of Humanities became the School of Humanities. This was the first structure of its kind among all of the UC campuses.

McCulloch’s deanship was followed by a series of humanities deans that shared his vision of strong faculty recruitment as they worked tirelessly to bring the best and brightest to UC Irvine Humanities. In the early 1970s, the School of Humanities launched a doctorate in critical theory, making UC Irvine the only university in the country to offer a doctorate in that field.

The Humanities Core Course was implemented in 1970. The academic excellence of the program was so strong in rigor and concept that many of the other deans on campus made enrollment in the course a high priority for their students. To this day, students rank the course among the best on campus.

Much of the 1970s were spent in recruitment mode as the School was focused on strengthening existing humanities departments rather than developing new ones by concentrating on adding robust faculty that would enhance scholarship in existing fields.

In the 1980s, Dean Ken Bailes was instrumental in the founding of the Organized Research Unit in Critical Theory and in bringing the system wide University of California Humanities Research Institute to UC Irvine. Shortly thereafter, the School of Humanities had the desire to grow by departments, but had few financial resources to draw upon due to the national economic downturn. One key strategic move that was made during this time was the establishment of East Asian Languages and Literature department (presently the Department of East Asian Studies). Pauline Yu joined UC Irvine in 1989 as founding chair and a leading Chinese poetry scholar. Meanwhile, interdisciplinary programs such as Chicano & Latino studies and women’s studies (presently gender & sexuality studies) were being evaluated for permanent homes in the various schools on campus.

The School of Humanities, despite budgetary constraints of the time, was beginning to gain national recognition, with many of its departments and programs being ranked in the top 25 by the National Research Council and U.S. News & World Report.

The 1990s and 2000s were marked by expansion and growth for the School of Humanities. Two new buildings completed the Humanities quad; Humanities Instructional Building and Humanities Gateway. The Samuel Jordan Center for Persian Studies and Culture was founded in 2006, one of the first centers of its kind.

The School continues to expand in its academic scholarship having not only added special programs such as Religious Studies and Armenian Studies, but also by creating cross-collaboration among different schools on campus such as Global Cultures, Medical Humanities, Shakespeare, Humanities and Law and more.