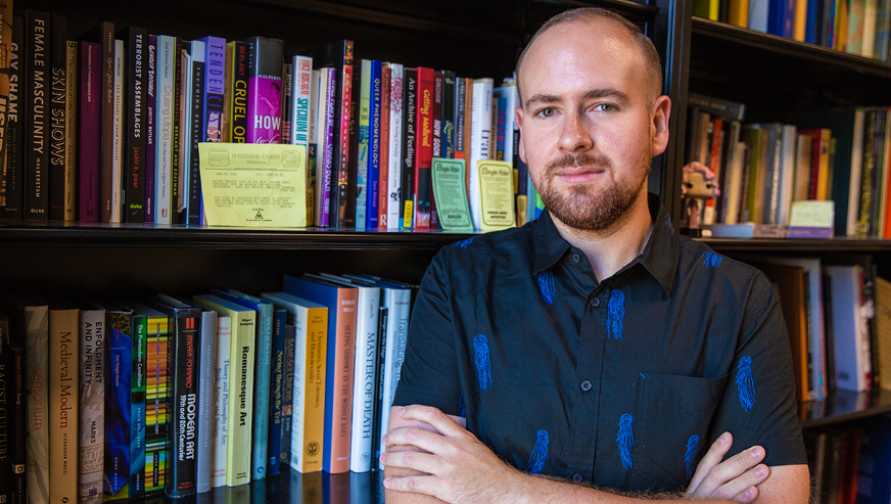 By Annabel Adams and Monica Luhar

When people warn that a political or social point of view could reverse human progress, they often joke it would take us back to the Middle Ages. But what if people in the Middle Ages were more open-minded in some ways than we are today? Roland Betancourt, associate professor of art history and visual studies at the University of California, Irvine, focuses his scholarship on bringing to the forefront marginalized persons of the Middle Ages who have often been ignored, overlooked, denied, or taken for granted. These examples of difference broaden not only the historical record but also our conception of how difference has been exercised, assigned and received over time.

Intersectionality in the Middle Ages

The word “intersectionality,” though not new, has become key to contemporary civil rights and social movements. It provides a framework to more fully understand how people are treated and disadvantaged--by others and by institutions--based on their race, class, gender identity, sexual orientation, and other identities. It is also a rallying cry for scholars to create fuller histories and accounts of the past that accommodate the diversity of the human experience.

Though the Byzantine Empire or medieval Roman Empire (330 to 1453 CE) did not use the terms we use today to describe difference and various identities across the spectrums of gender and sexuality, it does not mean that these identities did not exist or that we cannot look into the histories of people who self-identified, or were identified by others, as being outside the norms of their society.

In his current book project, Byzantine Intersectionality, Betancourt crafts carefully delineated narratives that offer surprising, nuanced insights into medieval life. These histories include eunuchs—figures assigned male at birth, who were castrated and lived their life as a third gender (neither identifying as male nor female), transgender monks, an empress ridiculed for her sexuality in a manner we would call “slut shaming” today, and differently-abled persons, among others.

“The goal of my book project is to pull the rug from under our learned helplessness on these issues to show that these prejudices have not always been the same. Medieval Christianity, for example, is repeatedly marked by narratives of transgender monks, gender-fluid eunuchs, and even praised at times the same-gender desires that knit together monastic communities,” Betancourt says.

Prominent eunuchs were a common feature of the Byzantine court who existed in their own gender category. Eunuchs were often high-ranking officials in the imperial court and members of the clergy, known for their patronage of the arts, extreme erudition, and political power.

“Leo sakellarios, for example, was a high-ranking eunuch who served as a treasurer of the Byzantine Empire. We remember Leo today for their erudite correspondences with the court and for having commissioned one of the only extant illuminated copies of the full text of the Old and New Testaments, a manuscript now partially preserved at the Vatican Library,” says Betancourt.

There was a great deal of variation as to how people regarded the role of gender expression in the Byzantine church – the forerunner of modern Greek Orthodoxy – as well as social attitudes toward gender and toward non-binary individuals. Even though the Byzantine world had a clear grasp of gender as a practiced social category rather than a prescribed biological identification, there is perhaps one explicit continuity with today: femininity was deemed inferior to masculinity.

“For a person assigned male at birth, the idea to live their life as a woman was merely seen as a sign of weakness and effeminacy that had no efficacy or virtue. This thinking reveals a form of transphobia deeply tied to and often inextricable from homophobia,” says Betancourt. One of these people was Roman Emperor Elagabalus, who was derided by the Roman historian Dio Cassius for dressing, grooming, and even self-identifying as a woman. However, most surprisingly is the historian’s suggestion that Elagabalus even sought out gender affirmation surgery, stating that Elagabalus had “carried his lewdness to such a point that he asked the physicians to contrive a woman’s vagina in his body by means of an incision, promising them large sums for doing so,” as is written in the Roman History (Book 80.16).

“Many writers went so far as to praise female-identifying people for rejecting their feminine ways and achieving a closer proximity to saintliness and God,” he says.

Despite misogynistic cultural and societal norms, many women were influential figures responsible for the patronage of art, architecture, and institutions. For example, the Byzantine princess Anna Komnene was the first female historian on record, composing a historical epic of the deeds of her father in a text known as The Alexiad.

Not only useful in broadening our concept of various identities over history, these lost or forgotten figures prove that what we often see as a poignant contemporary issue—how we categorize and treat those who challenge the norms of their day—has historical precedence and is not an invention of our times.

Representation in the digital age

At first glance, pre-modern and Byzantine history may not appear to be highly relevant or engaging to today’s students, but Betancourt has found that because the history is defined by icons and iconoclasm, “it can be used to better understand our image-obsessed present,” he says.

On the last day of his spring class “The Apocalypse,” Betancourt invited his students to create memes using pre-modern art. Meant to be shared online, memes are humorous renditions of existing imagery with added captions. He has facilitated similar activities in his courses “Sex and the Senses” and “Image Collision” in order to make the past a little more accessible and a little more present in students’ daily lives and pastimes.

This marriage between art history and the digital age is seen both inside and outside of the academy. To illustrate, one Facebook page dedicated solely to memes from classical art has over five million likes. And when Betancourt announced he would be hosting a conference on marginal identities in the pre-modern world, a re-Tweet from Medieval People of Color sent the seemingly niche event into the Twitter universe with nearly 30k views.

Betancourt enjoys seeing his students rethinking their preconceptions of the medieval period. “Students are often shocked when they realize how philosophically nuanced medieval writers and thinkers were, including their advanced state of medical knowledge about abortions and contraceptives, cosmetic surgery, and various gender-affirming medical procedures, and how religious practices could be innovative in thinking about gender and understanding sexual desire,” he says.

But besides rethinking how “medieval” the medieval period was, students are heartened to learn that the historical record shows an array of people—from all walks of life—grappling with their identities.

“It’s important for students to be able to see their own gender identities, sexualities, racial diversity, and disabilities represented in the history and narratives of Western European history and Christianity they study,” Betancourt says.