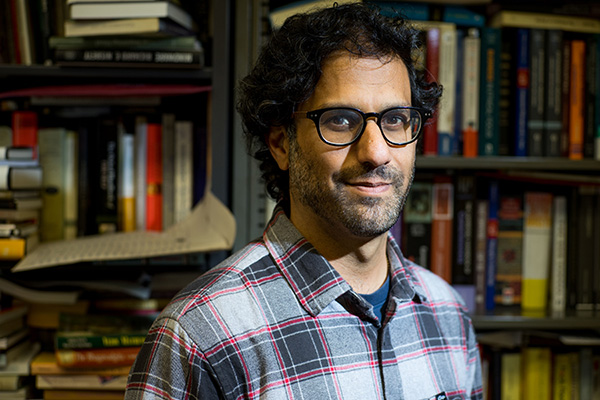 “Śaṅkuka Among the Scorpions: The Epistemology of Staged Emotion”

Abstract: In the aesthetic theory of classical India, theatre was not merely a form of entertainment but a way of showing an audience what it is like to live another life. Just one of the classical theories–Śrī Śaṅkuka (c. 850 CE) explores the epistemology of this aesthetic theory. In this talk I will examine the reasons his epistemology was rejected in the later tradition. Those reasons are unsound, but it is only with the help of contemporary studies of epistemic luck that we can see why.”

Jonardon Ganeri is Bimal K. Matilal Distinguished Professor of Philosophy at the University of Toronto. His work draws on a variety of philosophical traditions to construct new positions in the philosophy of mind, metaphysics and epistemology. He advocates an expanded role for cross-cultural methodologies in philosophical research, together with enhanced cultural diversity in the philosophical curriculum. His research interests are in consciousness, self, attention, the epistemology of inquiry, the idea of philosophy as a practice and its relationship with literature. He works too on the history of ideas in early modern South Asia, intellectual affinities between India and Greece, and Buddhist philosophy of mind. He has published nine research monographs and over eighty research papers. He has written two introductory guides to philosophy in the South Asian tradition: Philosophy in Classical India: The Proper Work of Reason; and, with Peter Adamson, Classical Indian Philosophy, the fifth volume to emerge from the well-known History of Philosophy without any Gaps podcast series. He is the editor of The Oxford Handbook of Indian Philosophy. He joined the Fellowship of the British Academy in 2015, and won the Infosys Prize in the Humanities the same year, the only philosopher to do so.


ABSTRACT: I have argued that the Analects of Confucius presents us with a full conception of reflection with two components, a retrospective component and a perspective component. The former component involves the hindsight or careful examination of the past and as such draws on previous learning or memory and previously formed beliefs to avoid error. The latter component is foresight, or forward looking, and as such looks to existing beliefs and various factors in order to hit the target or achieve knowledge. In this talk, I would like to reinforce the idea of the skilful reflection in the framework of bilevel virtue epistemology, from both Ernest Sosa’s perspective and the background of Chinese Philosophy. The point of the bi-level virtue epistemology, strictly speaking, is not to propose that there are different kinds of knowledge. The point is rather to emphasize the different kinds of competence or cognitive capacity which can help us acquire knowledge and gain certain epistemic status: either through the first-order competence or cognitive mechanism or by adding the second-order competence or meta-cognition on top of the given first-order one. Even for Confucius’s two levels of knowledge, the focus of distinguishing different levels of knowledge is not on the “knowledge” per se, but on the different ways of achieving knowledge. For Confucius, the lower-level knowledge can be attained simply by our five senses or memory, while the higher-level (or the best kind of) knowledge can only be achieved by manifesting our skilful reflection. To make this bi-level virtue epistemology more clearly and more significantly, it is important to notice the following different types of cognitive or psychological processes: simply seeing (hearing, smelling, tasting, and touching), simply memorising, simply reasoning, and simply introspecting, let’s call these the type-one (or the level-one) processes; reflectively (attentively, or consciously) seeing (hearing, smelling, tasting, and touching), reflectively (attentively, or consciously) memorising, reflectively (attentively, or consciously) reasoning, and reflectively (attentively, or consciously) introspecting, let’s call all of these the type-two (or the level-two) processes. The type-one processes, cognitive or psychological, involve only the first-order cognitive mechanism, while the type-two processes apply not only the first-order cognitive mechanism, but also the meta-cognition or higher-level competence. It is also important to realise the fact that we cannot have only employed our higher-order cognition without using or functioning any first-order cognitive mechanism, in which case it is like to reflect on, be conscious of, or pay attention to nothing at all.